What a pleasure to attend Satur 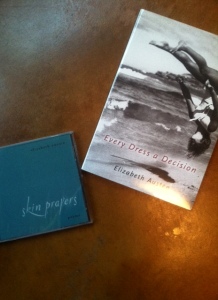 day’s workshop led by Washington State’s poet laureate Elizabeth Austen. Our group of twenty focused on close readings of several poems and discussed how critical visual imagery and metaphor are to vivid writing.

I had to be militant about getting the physical world into my poems, she said, encouraging us to examine our writing for physical sensations that give our poems power.

And what a delight to meet both Elizabeth and former state poet laureate Kathleen Flenniken later that evening for dinner with five others.Two women who do us honor and are so generous with their time and attention. Whidbey was doubly blessed.

Today’s Poetry Foundation poem featured W. B. Yeats’ Sailing to Byzantium. I’m a fan of Yeats’ gloomier moods like “Second Coming.”   Against the backdrop of Paris, it speaks so strongly.

Turning and turning in the widening gyre
The falcon cannot hear the falconer;
Things fall apart; the centre cannot hold;
Mere anarchy is loosed upon the world,
The blood-dimmed tide is loosed, and everywhere
The ceremony of innocence is drowned;
The best lack all conviction, while the worst
Are full of passionate intensity

First snows reignite childhood awe, yet make us anxious about our vulnerabilities to slick roads, iced walks. I woke Saturday morning to see my skylight coated with white that fell sometime Friday night and made some photographs to accompany my poem Frost. 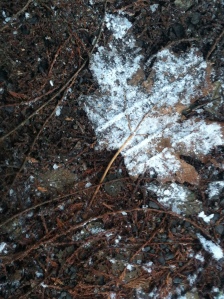 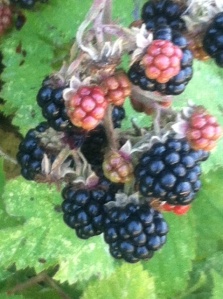 I’m thinking about a My Whidbey Year book of poetry combined with photographs that will excite — well, frankly — people who live on Whidbey. Maybe some Mary Oliver fans as well.

We’re savoring a perfect fall here in the Northwest. Many of us mourn the cool in the air, alders shedding their leaves, Steller jays scolding us again for cohabiting their domain, But we’ve enjoyed a long series of 80 degree days and afternoons reading in our hammocks.

Here is an excerpt from Late Summer Anxieties:

Former Secretary of the Navy and Virginia Senator James Webb voiced an often heard sentiment in a CBS Sunday Morning interview last week. He talked about the great impassable divide that separates those who have been to war from those who haven’t. Webb said, If you were there, I don’t need to explain. If you weren’t, I can’t explain.

Secretary Webb has given much to his country. I am grateful for his service and respect his intelligence. That said, I want to challenge the belief that non-combatants can never know what soldiers endure.

It’s true that those of us who have never seen a war zone don’t know the searing pain of having a leg blown off in an IED explosion. We haven’t experienced the anguish of a friend dying suddenly, violently, a result of our mistake, powerless to help.

But we are human beings, capable of imagining. Capable of imagining the worst. We have the capacity for empathy, for fellow feeling. We can smell the burnt flesh, feel the concussions, see the outstretched hands, hear the cries for help.

I struggled for months to support a friend suffering from post traumatic stress and depression, among other injuries. I failed.

My efforts are multiplied countlessly around the globe – loved ones trying to welcome their soldiers home. Our failures inflict new wounds and create many more walking wounded. Left unresolved, these stories repeat and repeat.

Phil Klay, author of Redeployment, describes these failures. Believing war is beyond words, he writes, is an abrogation of responsibility – it lets civilians off the hook from trying to understand, and veterans off the hook from needing to explain. Other projects that attempt to engage PTS and TBI sufferers through writing or performing offer initial glimpses of success. They convince me that “suck it up” is a slow poison.

I think soldiers have one final duty to their county – to describe the war they experienced on our behalf as authentically and to as many people as they can.

We noncombatants have a moral obligation to listen to their stories with care and compassion. We cannot judge them, we can only imagine future bad places.

This seems the only bridge over that impassable divide and the only path toward healing on a survivable scale.

And, just maybe, the only small hope for addressing future conflicts more adroitly than we have in the past.

Linda Beeman is the author of a poetry chapbook, Collateral Damage, published by Finishing Line Press. Its stories describe our Afghan War experience. 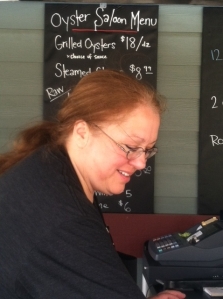 Traveling up US-101 from Oregon this weekend, I braked for Hama Hama Oyster Saloon on the Hood Canal. I’d driven through towns like South Bend that billed itself as the “Oyster Capitol of the World” and where local restaurant owners didn’t even know what I meant by ‘hangtown fry.’ Well, one restaurant owner did, but his establishment wasn’t open on the Sunday before Memorial Day. He suggested I try Chen’s place up the road, and recite the recipe. He was sure I could get a near equivalent.

So Hama Hama Oyster Saloon was a bright surprise. They host an Oysterama in late April of each year. Check the Web site. Then go by and let these lovely bivalves slide down your throat.

Wednesday afternoon’s interview with Perry Woodfin at our online public radio station, WhidbeyAIR  about my upcoming chapbook, Collateral Damage, from Finishing Line Press challenged and intrigued me. We explored questions about post traumatic stress and drone warfare. Perry expanded my definition of the damage trauma can inflict, and engineer Gwen Samuelson updated me on our shared D.C. hometown.

I didn’t know much about WhidbeyAIR before. I kept looking for it on my radio dial until I realized, “Duh — it’s only online.” Organized by Langley artists in the late 1980s, it aims to connect creativity on our island with the world. An all-volunteer staff keeps it up and running.

My interview with Perry will air Saturday, the 19th at 10pm, Sunday the 20th at 2pm. Otherwise, just link to WhidbeyAIR and click “Listen” to hear streaming content. 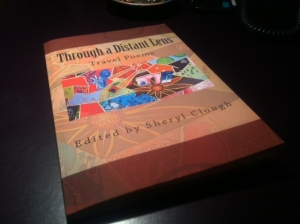 Through a Distant Lens: Travel Poems

Through a Distant Lens is Write Wing Publishing’s latest poetry anthology featuring 46 poets who describe travel epiphanies hiking in Peru and soaring aloft in a tornado. South Whidbey poet/educator Sheryl Clough edited this collection that she says, “…demonstrates that the physical body has no monopoly on movement.”

You have to admit that the going out and the coming back have an inexorable pull. If you’re in the area, celebrate it and join us next Monday, April 14th, at the Coupeville Library at 5:30 pm to share in these “lively, lilting works of wordcraft” or order the book at https://www.createspace.com/4394067. 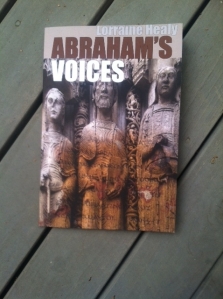 Lorraine Healy mentored our South Whidbey poetry group for countless Monday mornings, so we are excited about the publication of her new poems and photographs in Abraham’s Voices. The story of Abraham, Sarah and Isaac floats in our Sunday School memories, perhaps alongside the takeaway that here was a guy we definitely wouldn’t want to know personally.

Channeling its characters (including the ram), surprised Healy as well. “I don’t know where they came from,” she said. “They are unlike my usual poetry and are more fragmentary, with a different style of syntax. It was just a wild ride.”

If you’d like to hop on and order a copy for $10, contact Lorraine at her Web site at the link above.

Larry reminded me that he could never think of apples in poetry without recalling Dylan Thomas’s Fern Hill. What a pleasurable and timely reminder that was, this being the Thomas centenary. Consider the third stanza’s fire green as grass or an interval of time like all the moon long. Not many poets today would dare to begin so many lines with a word as weak as And, but it plays to the music.

All the sun long it was running, it was lovely, the hay
Fields high as the house, the tunes from the chimneys, it was air
And playing, lovely and watery
And fire green as grass.
And nightly under the simple stars
As I rode to sleep the owls were bearing the farm away,
All the moon long I heard, blessed among stables, the nightjars
Flying with the ricks, and the horses
Flashing into the dark.